The other day I was stopped by a security guard in the Arndale and told that I am not allowed to take photos of the centre by order of the management. (I was taking a photo of the Muffin Break sign, not on its aesthetic merits, but because I was thinking I might write a review of the place in a forthcoming post. The irony of this is not lost on me.) 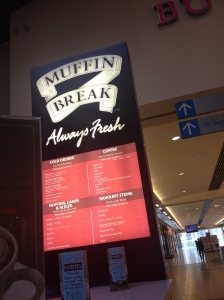 Not allowed: taking a photo of a company sign with a view to sampling their products.

Why such a prohibition, I wonder? After all, I wasn’t taking a photo of something that’s not meant to be seen, such as a sensitive security arrangement, or even an embargoed new product, or something that would intrude on someone’s privacy: it was precisely a photo of a company logo of the kind, it would seem, which the mall management are otherwise so very keen to foist upon my retina. A sign exists to be seen and has no other function. And as members of the public who use or walk through the Arndale, we are ourselves being filmed (and have no right to refuse): 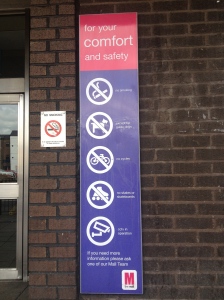 We are being filmed ‘for our comfort and safety’, but no mention of a ban on photography.

In the spirit of citizen journalism (and cussedness) central to the Yoga World & Pesto ethos, I feel impelled to consider the matter in more detail and share both the fruits (and photos) of my investigation with a wider audience. Since I may be served with a cease-and-desist order in due course, enjoy this post while you can. 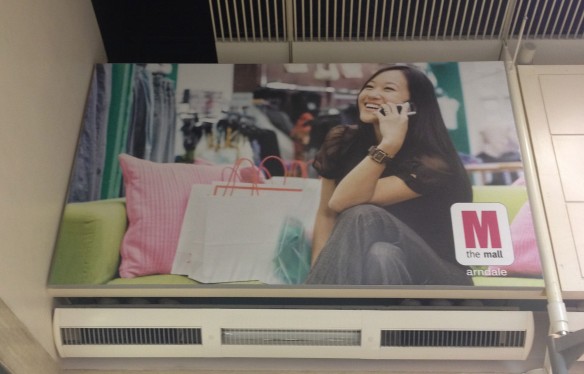 Generic fun taking place somewhere other than the Arndale.

The Mall rises up to greet you at almost any approach to the town centre: whether from the train station or Cheapside; Church Road or St Mary’s Church; from New Town, or the Old Bedford Road. With the exception of the newly re-clad entrance at St George’s Square, the prospect is uniformly grim, though the monstrous concrete whirligig that serves as entrance to the car park I remember with some (misplaced) fondness from my childhood. 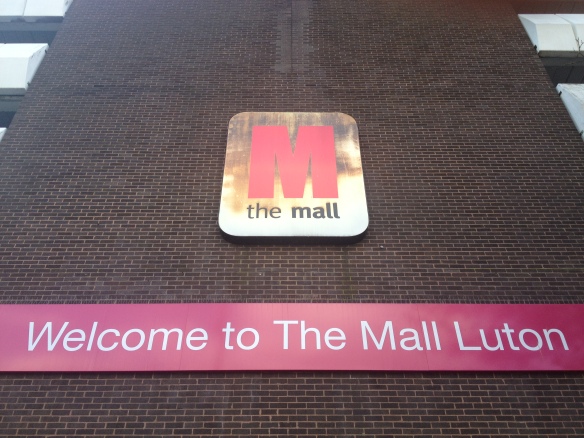 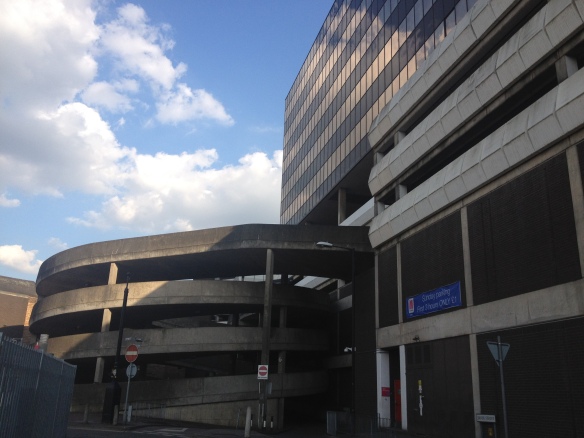 Best days of my life: the spiral entrance to the car park was a positive source of fun in my childhood.

But we shouldn’t judge on outward appearances alone. My customary route through the Arndale takes me via the Silver Street entrance, where occasionally both escalators are in good working order: 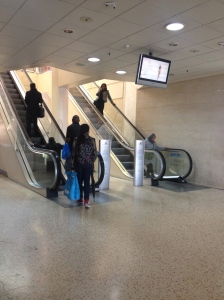 An instance of the escalators working in both directions.

The Arndale opens its doors punctually at 6.30am (I know this only because I used to go to an early morning exercise class) and starts to close from around 7pm onwards, though the central ‘walk-through’ stays open later as a concession to the fact that the shopping centre cuts across the town centre and is of necessity an important pedestrian route. 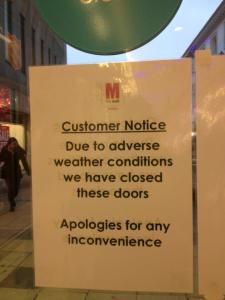 On the inside, all is perma-lit corporate cheerfulness signalled by enormous posters of joyous female shoppers: 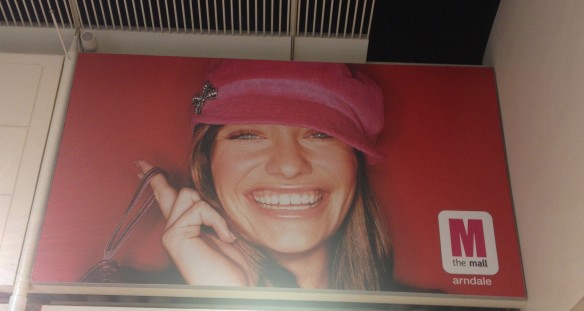 The woman of continual retail-driven mirth.

As with everything I write (O, wanton shades of grey!), I am in something of an ambivalent position with respect to the Arndale (though the ‘love’ pole of the love/hate oscillation remains seriously underdeveloped). The Arndale is ugly, corporate and spiritless, perhaps nowhere more evident than in its insistence that it is officially ‘The Mall Luton’ rather than the name by which it is known to the entire Luton population. Somewhere, and probably not in Luton, a corporate management team decided that the ‘Arndale’ no longer fit within a centralised branding conceit across a national chain, and chose in one fell swoop to disregard the preferences, lived experience and local history of the townspeople, their customers.

It the mall management are concerned that my unauthorised photos threaten to steal the Arndale’s soul, they have little to fear, since the The Mall Luton is soulless in its fundaments. What there is of spirit and vivacity within its officially unphotographable walls is entirely an artefact of the people who walk and work through and in the Arndale every day, a robust casserole of diverse ethnicities and cultures brought together by a common need to get to Tesco before it closes. 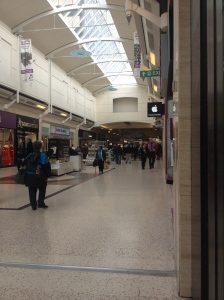 Another thrillingly illicit photo of the Arndale.

I do not want to suggest that real lives are not being lived and played out within the confines of the Arndale, which is finally not only a privately-owned retail centre but a workplace, social space and commons. Though they are mostly relegated to poky corners, there also remains a number of small, independent businesses, chiefly located within the Indoor Market, which is great for fruit and vegetables and specialist Asian and Afro-Caribbean foods (including a halal butcher), as well as a barber, health food store, and a range of other stalls. Though the windowless, airless environment of the Indoor Market is hardly the most appealing, it is a surprisingly good place for lunch, with a number of eateries (south Asian, Afro-Caribbean, middle-eastern, as well as the more established ‘caff’, Tim’s Kitchen, which has relocated there in recent months).

So the mall has its uses. Should friendly bombs come and drop on The Mall Luton rather than Slough, I for one would be at a loss for my nearest branch of Foot Locker (our closest HMV is now in Milton Keynes or Stevenage). There is value in being protected from the elements whilst one shops and in bringing together a number of stores in one location. It is useful and necessary in the way that the current government is useful and necessary, which is equally not to say that the Arndale, like the current government, might not be very much improved by ditching the lot and starting again.

But since that is not going to happen, I am forced to accept that my relationship with the Arndale is possibly lifelong, and had accordingly better make the best of it. In previous years there was talk of a newer and shinier retail behemoth coming up at Power Court, but like so many things in the history of Luton’s recent redevelopment ambitions, the idea appears to have hit the buffers. 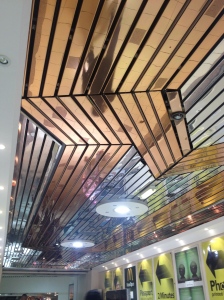 One of the Arndale’s more curious exits, leading down to St George’s Street.

As a pedestrian, the Arndale is an unavoidable part of Luton life. In an earlier post you may remember that I wryly compared the experience of walking through the Arndale on a busy day to Bede’s famous bird, whose momentary flight through a bustling banqueting hall is a striking metaphor for the ephemerality of life itself. Though strictly speaking it is possible to circumnavigate the Arndale, it is not an efficient way to cross town. Thus I am required to encounter the Arndale on an almost daily basis, regardless of whether I have any need or desire to buy anything. For me it is the functional ubiquity of the mall as a feature of the Luton experience that makes me take umbrage at the notion that I am not allowed to take photos of it.

The Arndale is indissociable from a Lutonian psychogeography, and I have as much a moral right to claim, represent and write about the centre as I do about any other aspect of my life. I am reminded of the scene in B.S. Johnson’s brilliant and fiercely funny novel, Christie Malry’s Own Double-Entry, where Christie reflects on the ‘debit’ dealt him by anonymous, historical others in the placing of a building that directly impedes and structures his possibilities for walking down a given street (he decides to exact ‘credit’ by scratching a line into the wall of the building):

from ‘Christie Malry’s Own Double-Entry’, by B.S. Johnson

None of us has chosen (or would frankly choose!) the Arndale Centre, yet we are nevertheless subject to and made subject by its sheer physical dominance of the town centre, and the pervasiveness of its corporate marketing. By that I mean that the Mall Luton – the signs, logos, promotional posters, the building itself, its sanitised images of ecstatic female consumers – intend to position us and structure our responses as consumers first and foremost. As the French philosopher, Louis Althusser, would put it, the corporate restrictions placed on my desire to document and make sense of my physical surroundings are an interpellation (or simply, a call to see myself as a consumer) that I am not compelled to obey. There is, of course, a potential irony in this. Since I live in a society saturated by corporate logos, the effect of any détournement of intent by taking photos of shops for the purposes of my blog poses only a weak threat to the structures of corporate power, and perhaps I am only extending their work, responding in my way to the endless call for ‘interactivity‘. 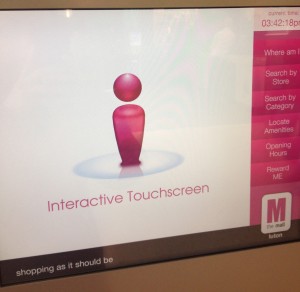 Shopping as it should be: interactivity is formally encouraged, but only on their terms.

There is little in the signage and strip-lighting of the Luton Arndale that warrants extensive, loving photography. To the extent that I include ‘The Mall Arndale’ within my documented experience of Luton, the management, whoever they are, should be grateful.

3 thoughts on “On Not Being Allowed To Take Photos In the Arndale: A Visual Odyssey”