As an occasional listener of BBC Radio 4’s Today programme, I am always reminded of ‘Thought for the Day’, the curiously annoying daily religious segment, by the acronym for our local residents’ group, the Friends of High Town (or FoHT), whose first meeting of 2014 took place last night on High Town Road. Indeed, local friend Grumbly Bob and I devised our own theme tune to Thought for the Day, to the tune of ‘Egg on Your Face’:

The joke ends there. I rather like the Friends of High Town, and indeed was briefly involved on their committee last year. They are a small but welcoming group open to all of High Town ward’s ten thousand residents (yes, ten thousand). Unaffiliated with any religious group or political party, they exist simply to take steps to improve and promote the area and represent residents’ views in wider fora. Strictly speaking, I probably shouldn’t even be there (as a resident of Round Green, a short way up the hill), though High Town preponderates in my local imagination and day-to-day living (the Friends of Round Green have yet to forge an existence).

FoHT meetings take place once a month (always the second Tuesday, always 7pm, always at High Town Methodist Church: the building to the right; go in through the small door), and are effectively free, though a £2 subscription is paid once a year at the AGM, and are ably run by Chair David Landau and Secretary Annie Bygrave. David, a BBC broadcast journalist, would no doubt approve of the meetings’ propensity to entertain as well as educate and inform. Certainly, last night’s meeting may well have achieved peak joviality, and surrealism unlikely to be outdone by Ambridge.

In yesterday’s meeting, the redevelopment of Welbeck Square (aka The Bit Between The Mediterranean Coffee Shop and the Strangely Viable TV Repair Shop) took centre-stage. Draft plans, not yet released for consultation, propose to overhaul the area with not-immoderately high planters*, seating and a refreshed paving area, while retaining access to the bins (the bins!) and some measure of bush-based privacy for local residents. A hoped-for tree does not appear likely, and additional bollards remain to be confirmed. The plans should be available at the February meeting. 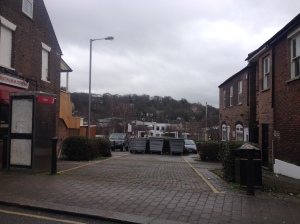 Welbeck Square: ‘I don’t think the bins are meant to be a feature’.

My recent call for a maypole, meanwhile, now feels markedly under-ambitious in the light of last night’s suggestion that we consider raising a High Town Totem Pole (or HTTP, for short) in People’s Park. The park, you may remember, recently won a Green Flag award, and somebody somewhere is in possession of an actual green flag awaiting suitable display atop a flagpole, maypole, street-lamp or – and why not? – a massive hand-carved totem pole befitting Luton’s evident affinities with native American spiritual practice. 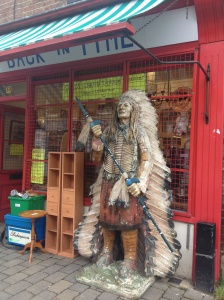 I knew this picture would come in handy one day.

A totem is the symbolisation of the attributes that define a clan, which leads me to wonder how we might go about visualising the defining qualities of Luton in general, and High Town in particular. Hats, of course, are the obvious suggestion, given the great number of disused and converted hat workshops and factories within High Town. But they represent an aspect of Luton life that no longer accurately reflects either the present-day town or our likely future. Indeed, we might make at least as strong a case for a hand-carved pole in the shape of a doner kebab, or something similarly shaped to reflect High Town’s persistent, if overblown, association with prostitution.

Other updates included news of plans to establish a sweet shop run by children in the premises of local upholsterer and erstwhile Queen-pleaser, Waller. I kid you not. It’s an actual plan by Barnfield Skills Academy to teach local youngsters how to run their own business, but whether High Town needs or wants a sweet shop (run by children) is another matter, and the sustainability of the venture is unclear.

High Hats, meanwhile, is applying for additional funding to see it past the end of February, though in the interim I also hope to be starting a weekly yoga class in the shop very soon (watch this space). Best-One supermarket (which we learned is called le magasin bleu by local mutineer hat-maker Marie-Louise) is up for sale as it approaches the end (16 years) of its lease, while discussions continue with regard to a possible major-name supermarket taking over the former Noah site nearer the train station. 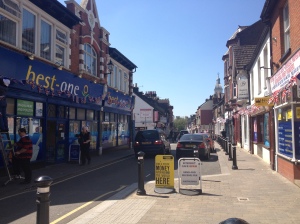 An oblique shot of Best-One during the 2012 Jubilee preparations. A much better picture than the one I tried to get in the rain earlier today.

The question remains: how to attract and foster new business in High Town, and indeed sustain the businesses we already have? I see no concerted efforts on the part of Luton Borough Council to promote any part of Luton to people outside the town, and have previously noted the curious unwillingness of some local traders to refresh or develop their own offer.

Amid the more quirky aspects of last night’s meeting, there was also a serious suggestion to assemble business planning resources (eg. resident demographics, local surveys) in order to support – indeed, court – prospective new small businesses. Informally, some landlords are already doing their bit by offering ‘rent holidays’ for new businesses, but a more widely accessible project to enable short-term rentals (‘pop-up shops’), or even a regular street market of the kind seen in places like Hackney could offer an invaluable bootstrap to small-scale, independent retailers on their tentative first steps.

But how to do this? The High Town Team, a relatively informal consortium of local representative bodies, including FoHT, was set up a couple of years back to apply for grant funding from the Mary Portas fund, and (though unsuccessful) continues to work together to raise money for small local development projects.

The Friends of High Town, meanwhile, are hamstrung not by lack of organisation or credibility, but by the absence of visible local support at their monthly meeting. They exist to represent all residents, have no political or religious axes to grind, and genuinely seek to create an improved High Town for everyone. At yesterday’s meeting, I counted around 10 attendees, only a small showing of FoHT’s total membership and a tiny fraction of the overall HT community.  If you are interested in High Town, I would urge you give FoHT to community development and try to get along to next month’s meeting (Tuesday 11 February, 7pm) or make contact directly with David and Annie via email, at friendsofhightown@yahoo.co.uk. We’re friendly, and there’ll be biscuits.

* Initially described as ‘400cm high’, until I sought an urgent clarification. The actual plans are for 40cm planters.