I have a little joke (mostly with myself) that I bust out almost every time a friend of mine (and occasionally a date) does me the great honour of coming to see me in Luton. Meeting them at the train station (since I should not like to leave them unchaperoned), I say, ‘Would you like me to give you the tour of Luton? Don’t worry: it won’t take long.’

I then proceed to march them in an exciting if demented double-arc that proceeds from the train station and takes in the Arndale, St George’s Street, the Town Hall, St George’s Square (with a nod towards the library and the Galaxy Centre) and then often times (for good measure) as far as the corner of Park Street with Vicarage Street, past St Mary’s Church and through the university, gesturing momentarily toward the ruins of Power Court, before finally heading back toward High Town, or indeed Round Green, where I live.

I am not really sure what my guests make of this (I don’t hear back from the dates), but at any rate I derive a certain amusement from it, born in part of the terrible irresolution I feel in respect to the town that has been my home for the last 7 years. ‘Look at the town hall!’ I say. ‘Isn’t it a surprisingly attractive building, if not modelled somewhat in a fascist style?’

‘How like you the commanding architectural swoosh of the Galaxy Centre that doth mirror the curve of Cresta House on the adjacent corner?’; this kind of thing.  (Of course, the casual visitor in daylight hours misses out on the full and particular radiance of the Town Hall by night.) 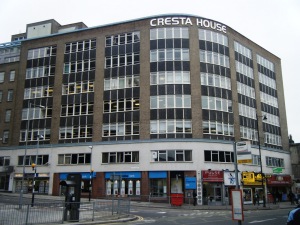 In doing so I inwardly recall the time when I was first offered a role at the University of Bedfordshire, which required me and my then partner to move from Brighton to Luton. While I could still recall a few memories of my time here as a child, it was for him an entirely new and unappealing prospect. On our first tour of the town, one Saturday in the summer of 2006, we somehow managed to circumvent the town centre almost in its entirety; I think, because we avoided walking through the Arndale. It was a decidedly strange experience, as we encountered an almost deserted town that seemed to have nothing – not even one major shopping drag or public square – at its heart.

It also threw up my one and only encounter with the famous Luton rats so beloved of the Daily Mail. Around Cheapside by twilight, we saw, first, a large-ish animal scurry across our path (whether a rat or anything else, I cannot finally say), followed in hot pursuit (and I do not lie) by a group of men wielding knives (again, putting meat – presumably rodent – to the bones of my long-awaited theory that living in Luton is like Hotel California). As first impressions of towns go, it was certainly memorable. Later that evening I turned to my partner to ask him how he was feeling. ‘I feel like crying,’ he replied.

(Of course, he’s still here today and happier in Luton than he was in Brighton. It’s funny the way the things work out.)

Speaking of rats, I generally expect to field a question on the thorny – nay, trolley-filled – question of Luton’s waterways. Because Luton, or Lea-tun, is, of course, the origin of the river Lea, from its source at Leagrave, out to the River Thames. While the Lea is beautified and celebrated in other towns along its route, the river is held oddly captive in Luton and largely entombed in concrete. Where it does emerge, blinking, into the sunlight, it is usually extensively littered by tin cans and abandoned trolleys. 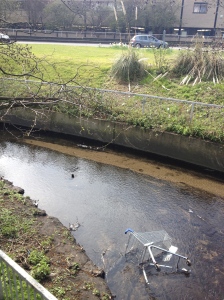 As the good boys of Luton Haiku/Clod/The Knockouts put it in their own, vastly more entertaining, filmic take on the Luton tour, the great cities of the world make the most of their rivers. But not Luton. (If you have not already seen it, may I strongly recommend that you immediately go out and buy a copy: only £3, and excellent). You can see very small sections of the Lea behind the Galaxy Centre and in front of the Arndale on Silver Street, as well as around the pedestrian underpass around Park Viaduct as it connects at the roundabout with Crawley Green Road, St Mary’s Road and Windmill Road.

Ducks to the left and right: a number of these mysterious signs can be found in the town centre (possibly tracing the underground course of the river Lea?)

Though I don’t generally venture as far as this on my town centre tour, I do make a point of taking people to see the University of Bedfordshire, not least as an important staging post in my personal Luton itinerary. Despite my own experiences there, I continue to have a lot of time for the university and much that it stands for: as a place of opportunity and learning for anyone able and minded to further their skills and qualifications, the University of Bedfordshire trades on its diversity rather than its elitism; on inclusivity rather than exclusivity. Physically it has changed almost beyond recognition from when I was last there in 2008, though the ironically-named Fairview House, where I worked, still stands while plans to demolish it entirely to make room for a new university library are progressed. 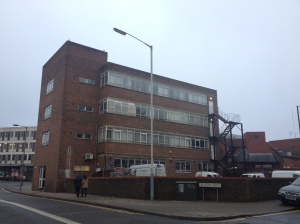 Would Fairview House by any other name be as rubbish? Most likely, yes.

The university’s former vice-chancellor, Les Ebdon, used to say that he had always intended to ‘turn the university round’, which was a wry reference both to the former University of Luton’s ailing fortunes as well as a nod to the proposed – but then abandoned – plans to build a new commercial and residential centre in the area of Power Court, which could make a strong case for reconceiving the entrance to the university from the St Mary’s Church side. As it stands, the university seems to be hedging its bets and throwing up trendy new buildings of questionable long-term architectural value in every direction from its dead (and red) centre at Park Square. 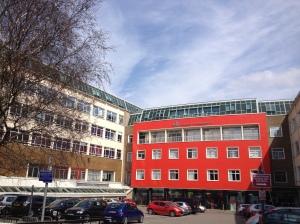 The University of Bedfordshire’s jaunty façade at Park Square.

In a way, the university wraps itself around the site of St Mary’s Church (which has a remarkable history that can be traced back as far as the 10th century) and incorporates the church into university life as the venue for its graduations. It is also next door to the UK Centre for Carnival Arts, which has emerged to support and sustain Luton’s new tradition (since 1976) of hosting the country’s second largest carnival (held today, 26 May, in 2013!).

From there, I round back to the train station, and the entrance to High Town, where only recently I got over-excited by the new paving area (and the intelligent relocation of the pedestrian crossing) around the entrance to the station on Midland Road. My enthusiasm for the new paving stones was knocked cruelly back by my itinerant European friend who instantly proclaimed that the workmanship was a bit shoddy. There’s quite a lot like this in Luton: the design of the new station car park came as a surprise to almost everyone (no-one was expecting it to look quite like this), and substantial improvements to Station Road have not been matched by any improvement at all to the station itself, which remains solidly neglected by its owners, First Capital Connect.

But there are some signs of improvement. The High Town ‘mural’ is back up after being rudely pulled down and replaced by an advertisement, and there is talk of a more permanent sign at the entrance to the station, which would be lovely. I should, at this point, also declare a new interest. I’ve been recently persuaded to get involved with the local residents’ group, the Friends of High Town, which I’m delighted to do despite living (by a very small distance) just beyond their borders.

‘Hightown’, as conceived by its mural: an oddly spacious, rural idyll.

As tours go, it is not a very impressive one; I know. But somehow it has started to feel important to me that I do showcase – however ironically – the town where I live. I recognise that this has something to do with my own changing perception of Luton over time. Like Henry Higgins, I find myself prepared to concede that Luton is ‘second nature to me now/ like breathing in and breathing out’ and that I am actually less willing to leave Luton for elsewhere than I thought. (Happily this coincides neatly with the fact that I am almost entirely unable to sell my house right now, and I remember with a certain fondness the person who roundly declared that my love of Luton was nothing but an instance of ‘Stockholm Syndrome’, and maybe it is: one can but make the best of the circumstances in which one finds oneself. I find myself in Luton.)

I had perhaps haughtily assumed that Luton, like Eliza Doolittle, would be a habit I could always break, though – let’s not overplay the point – I do sometimes still find myself wishing I could go back to Brighton, or live in London, or even live abroad in somewhere like Berlin, or in France. Luton is not always an easy place to love, and it is very easy to reject out of hand upon first encounter. Luton is not good-looking; Luton is not seductive; Luton is flawed and sometime deeply frustrating. Perhaps more than other towns, Luton places a demand, an ethic of responsibility, one might say, on the person who comes face-to-face with her.

Over time, I believe that the town does repay one’s engagement with the place and with the people, but it does so precisely as a function of the networks of community that one develops in a piecemeal and incremental fashion. You have to make an effort to love Luton, and I rather love Luton for that. Alongside those who hate Luton despite having never (or barely) visited, there are, I suspect, those who use Luton as a dormitory town, spending all of their free time and money anywhere else than the town in which they are resident. It is, as we have already noted, surprisingly easy to leave. But then again, not quite as easy as you expect.

5 thoughts on “My Fair Luton: On Growing Accustomed to Luton’s Face.”